As Testing Grounds moves to a new site in Queen Victoria Market, Millie Cattlin and Joseph Norster revisit a letter that they presented in 2014 - six months before the site officially opened.

by Millie Cattlin and
Joseph Norster

In 2014, a little over six months after Testing Grounds opened at 1 City Road, Southbank for the first time, we presented at Open Engagement Conference in New York. The presentation took the form of an open letter, read aloud, and a companion work of instructions for care left behind on site – part didactic plaque, part operational instructions.

In 2022, nine years later and with the imminent move of Testing Grounds to a new site in Queen Victoria Market, we have re-visited the letter as a form of healing and renewal.
Alongside this letter is a sequence of photos from our first site visit to 1 City Road on 23 March 2013 – shade cloth, switch board, clover. 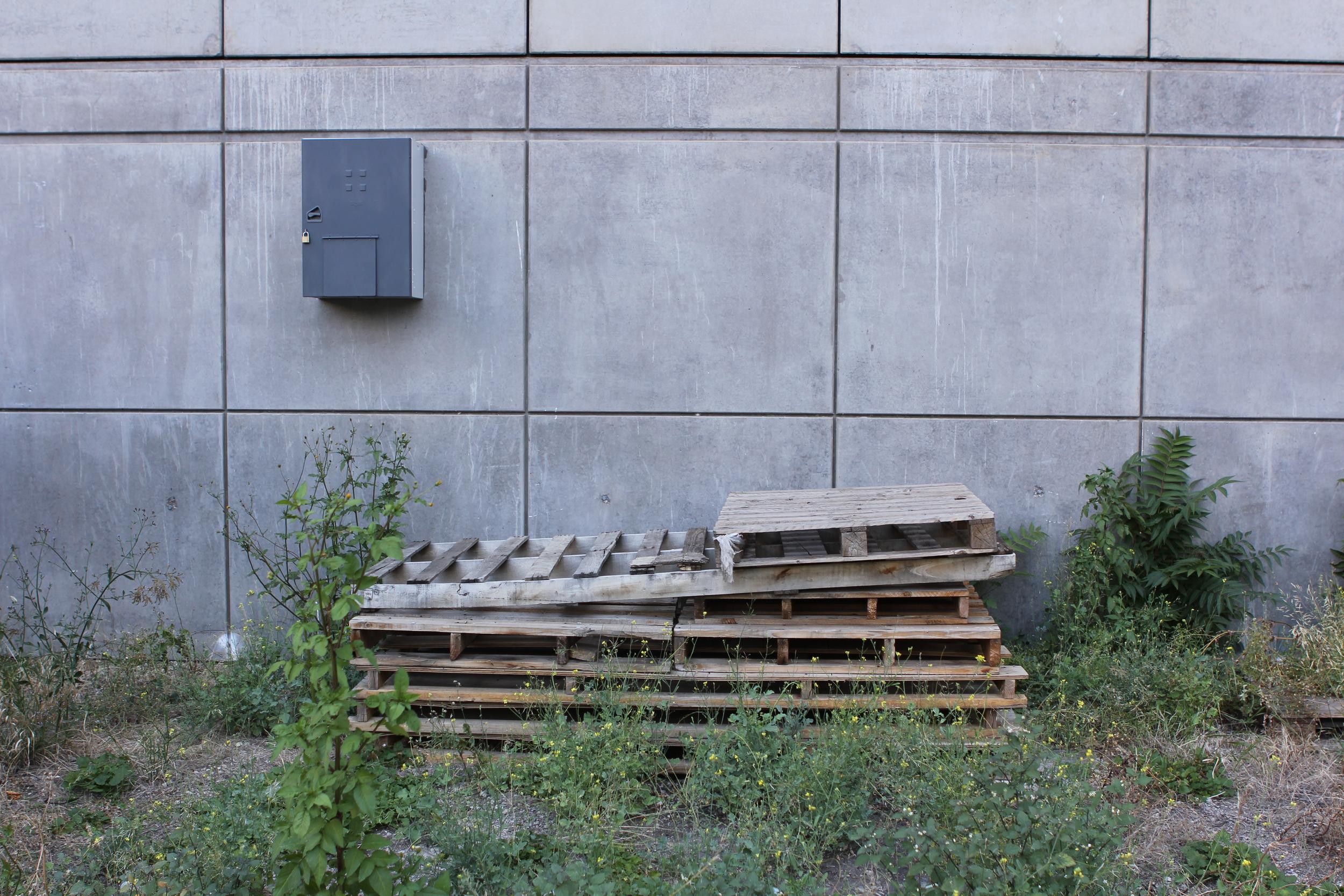 It's getting dark earlier now and autumn the winter is coming to Melbourne, and we have almost packed you up so many times now, so many endings and restarts, so many options and extensions and returns, flown half way around the world and to talk about work and art and life and the things that bind these things, things that have never really stood apart. This is just as real and critical and needed now as it has ever been.

A year has past now, Nine years have past, a little more truth be told, and the gates are closed for the last time and the birds and rambling plants and foxes rain is are coming back to the site and we put on our boots and hats and gloves and scarfs once more drive by slowly with the window down and arm out and try and touch you as we pass.

In the morning we walked across you, splashing through the long grass and muddying the studio floor with your yellow clay.

We are far from you now, having flown across the world to another city, another time moved house and had kids, new projects, different teams. We wanted to say, we wanted to tell you, we wanted to reveal the depth of our care and concern.

You surprised us; you came up out of the ground, a hidden thing, forgotten thing in the middle of a city. Everyone talked about you as a problem, a big vacant site, awkward, misshapen, fought over by those around you.  Subject to reports and studies, analyses and comment, each one with a detailed litany of your problems, your lack and difficulties.

Too exposed, too hidden, too contaminated, too sterile, too isolated, too engulfed, too geologically unstable, too forgotten, out of reach out of place out of time out of mind, out of the way out of money and out of kindness we will ignore you and hope you go away.
Everyone wanted to be with you, to have a part of you, to be a part of you, to make and think and work. So many reports and acquittals and graphs and data, detailing the rich and vibrant use, the critical need for you, the timely nature of your program and progress.
Too valuable, too vital, too useful, too relevant, too there to be lost and now we need to move you, to find a home away from home. Surrounded by the home of Opera Australia, The Australian Ballet, The National Gallery of Victoria and the Victorian State Theatre, all are within frowning distance of your weeds and windblown flotsam.  How did you last so long amongst these giants of high culture?

An idea is formed, just a whisper in the back rooms of public policy, the caretakers have the keys. the repairers, the maintainers, the ones who fix the windows and close up at night.  The artists, the makers, the programers, the curators, the ones who dance in windows and sing all night.

You are to be part of the city’s arts precinct, Market Precinct, the proposal we give they accept, allow us to open your gates, take down the black shade cloth, and give the people open access to you day and night for the first time in 30 years.
A program of live production and experimentation, of up close and personal exchange between art and people and you. On display, art hall, cornuartem.

The caretakers have the keys. The program is simple, use the budget that is spent weekly on rubbish removal, fence repair, and weed killing to run a public art project that allows the community to access and program the work that happens on site. Create a genuine and lasting relationship with the locals by giving them a place to feel at home.

Care is needed, you sit on sacred ground, damaged ground, roiling and riven with bones and bad memories. You can help heal, maybe you can help repair and fix and mend and bring new graces.

March in Melbourne and when we first walked and sat, you were everything but empty. You were full of bugs and clover, small flowers and strange patches of concrete. Patches of light moved across you, reflected from the office towers that surrounded you, a sinkhole, a depression, a void. The last of summer still holding onto the wild fennel and canola that carpeted you. It's March in Melbourne once again, nine years on and you sit, waiting, still and ready to be lifted and packed and painted and cut and cleaned and transported to your new home. Meanwhile the site is returning to the rambling wild, overgrown and full of other life, full of other times. We sat with you and just looked for months. Watching the winter come on and the site grow dark and cold, the ground soft underfoot and the foundations of the old building now long gone, exposed and rusting.

These first days, and then weeks, that pile up with the leaves of close observation, of daily care, of exposure to the elements, exposure to the sun, the wind, the rain, the too rapid setting of the sun form a bond, a very real connection with us. We start to know you in a way unexpected.

The market, the Vic Market, the Queen Vic, QVM, so well known, so integral to a kind of Melbourne, to a kind of early morning incantation of fruit and fish and fresh coffee. A place we have been coming to since before we could walk, full of magic and excitement and experiment and ritual.

First arrived a single shipping container, 20 feet of rusty steel, which we turned into a workshop, at that stage we had no toilet or running water, so in the workshop we had a small bucket and a water jug, an electric kettle and tea, we had a heater and gloves for our hands. Big and bare, we came and spent time with you through autumn and winter.

We are still interested in notions of exposure, to the elements, to ideas, to the observation of others. We take down the 300 metres of black shade cloth on your 2 metre high fence and watch as walkers and riders and passing traffic notice you for the first time. Conversations through the fence, at the gate about the place and the work that is going on just the two of us and an overly friendly kelpie pup. We meet the walkers, we meet the mothers and students and workers that pass by. We answer questions; we talk about public space and art. We learn that most think you will be a car park or hotel, apartment tower or office block, a theatre, a gallery, an art centre, museum, rehearsal space, prop store, artist accommodation or park. We tell them that you will be open soon and they should come and see. We think it works, we think we are ready. October 4, as spring settles in we open the site for the first time, 10am and we cast footprints in concrete and drink tea, and the locals wonder in and look around. We talk and show, the little things that have taken so long.

You are in the shadow of Melbourne’s Arts Centre, a strange back of house paddock that has slipped out of sight and out of mind for so long.

We admit it, we hadn’t heard of you, you were unknown, a ghost, a blank, a burnt out pixel on our map of the city. We pride ourselves of having lived an urban life, a close observation of the city and its streets and back lanes and hidden places, and yet you had remained unfound. We have spent every day with you, everything that is here now, that you hold we have built, the two of us together, we know you so well, its just been us and you for many early mornings and long nights.

This project has taught us to take our time.

The building that stood on this ground, killed by the building of the Arts Centre and your namesake’s dream, had a caretaker and a dog and we now fill this role, as caretaker, also with a dog.

There is much to be talked about, contested, explained, examined and interpreted. So many voices and opinions, so much at play and so much good work to be done. There will be conversations, discussions, panels and people piling on to the work of discovery. There will be students making mistakes and tripping up and being caught out by enthusiasm and lack of research. There will be dancing and music and art suspended from your beams and store holders wondering what it's all about and finding something interesting and new.

You have had concrete casting, silent disco, woodworking, painting and video. You have had craft sessions and hand poked tattoos, weeks of live music and you have been sung to and sworn at, broken open and set fire to, you have been 3D terrestrial scanned. Students come to learn and ask questions like “can I dig a hole here?”

You have been filled with sunflowers, you were burnt by the summer sun, we have buried a rabbit beneath you, we have projected films on your wall. Sparrows, pigeons, dogs, foxes, snakes, mice and rats and people all call you home. I think you would agree that there have been some touch and go moments, doubt and worry creep in, loss of heart and just down right tiredness take their toll.

It’s a neat trick to fold your canvas into a few A4 sheets of paper, a topographical origami in defiance of at least the one of the laws of thermodynamics; to condense you, to distill you into your 2000 square meters into 10 minutes and a 1000 1724 words.

See you soon.
Millie and Joe.