Ideas about Saxon Street as a building, a program, and a site. 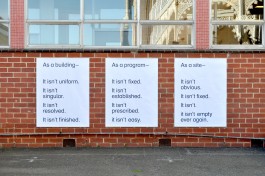 Siteworks, in some respects, is like a well designed hospital – The operations and needs of the people who inhabit the site and buildings are what dictates the form absolutely.

It is designed from the inside out. It triages need as required.

Siteworks is also nothing like a hospital in that the build-up of personal moments, the ad-hoc attachment to the building, the remnant is allowed to stay and it informs future use.

As a building–
It isn't uniform.
It isn't singular.
It isn't resolved.
It isn't finished.

As a site–
It isn't obvious.
It isn't fixed.
It isn't.
It isn't empty ever again.